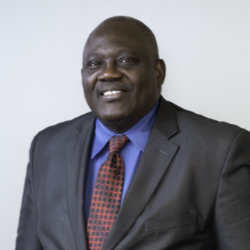 Latif also worked as a Mid-Level and Senior Associate at King & Spalding LLP in Atlanta, where he handled complex patent infringement and general commercial litigation matters. Representative matters include:

Over the years, Latif has developed substantial expertise in general commercial litigation involving patent, copyright, trademark, unfair competition and antitrust law, among others. Latif has also handled several matters before the immigration courts in New York and Atlanta as well a habeas corpus petition before the Eleventh Circuit Court of Appeals and a certiorari petition before the U.S. Supreme Court.

Latif is unreservedly committed to the firm’s mission to make top notch legal services available at affordable rates, and his general litigation background makes him counsel of choice for corporate or individual clients whose legal needs cut across several disciplines.

Latif is a past president of the Georgia Association of Nigerian Lawyers.

Latif is married to Sade and the proud father of 3 daughters. He speaks French and Yoruba, is an avid reader, a budding poet, and plays tennis in his spare time.